Friday dawns in a streak of icy roads (not good) and the promise of holiday ambiance (good) for the weekend.
A frantic week, marked by interruptions, apartment intrusions, doctor appointments, and all 'round general madness as the "man" in my life tried to unravel a contract he's working on, to see where and when he's leaving town.
Writing has been in fits and starts -- and so, it is, as far as I am concerned, NO-NO NA-NO. I took down my widget, as there is no point in seeing me move up to ten thousand words. That being said, I am very grateful for the lovely push this gave me -- and I will continue to post that one section in SFD of the book about Anna's journey to her debut recital in Berlin, as soon as I can!

After all, I can't just leave things dangling!

Today I will be writing, baking some shortbread, and plotting activities for next week. With "the Man" (Maybe I should call him Mr. Big -- my shortbread and other goodies do that to him -- ) gone all week, it will be quiet here. Writing and eating and sleeping etc. when I want to sounds good. So does the thought of a movie break.


I was so looking forward to the opening of THE KING'S SPEECH today, but I guess it's not going to happen for a couple of weeks.
I adore Colin Firth and period movies hold a fascination for me.

Speaking of period movies, I am working on an essay for LESSONS I LEARNED FROM MY MOTHER -- hope to receive more submissions! -- and it deals with teenage angst, feelings of ingratitude, and how my mother made me feel spoiled at a pivotal Dr. Zhivago moment.

Hope my American cousins are having a lovely Thanksgiving weekend!

Before I forget, my play on words has to do with the Broadway show, No, No, Nanette -- it debuted in the 1920s and there was a revival in the '70s.
The most well-known song from the show is "Tea For Two."


And speaking of tea...maybe scones would be a tasty addition to today. I love to make them using white chocolate and dried cranberries.

I have grandiose dreams of baking. That's because I still haven't eaten breakfast!

Email ThisBlogThis!Share to TwitterShare to FacebookShare to Pinterest
Labels: art of writing, cranberries, Lessons I learned From My Mother, Mr. Big, NaNoWriMo, No, No Nanette, scones, shortbread, The King's Speech, The Scarf Dance, white chocolate

TURNING CORNERS - Monsters Out From Under The Bed

An Embarrassment Of Bitches

I'm in the throes -- a major wrangling with me, myself, and Evil Twin, who really gave me trouble yesterday. I wanted to write well. She wanted me to do the laundry, take a shower, cook. Now, how rude is that? All part of a conspiracy to distract me from what I needed to be doing -- writing!. Frustrated beyond belief, I decked her one, even though violence is not the answer.
Trouble was, I didn't even know the question.

Well, maybe that's not entirely true. I think it was: how can I write this part of the novel when I am all too aware of what is coming on the heels of Anna Garber's debut? Misery, that's what.

In fact, the pages I am currently trying to lay down are filled with all the wonder and longing of a young woman, holding a terrible secret, who falls in love with a piano virtuoso in his own right, who will help her unlock the romance in Chopin's soul and in her own. Very romantic stuff, very charged, very tumultuous and ultimately, very...well, let's leave it alone for the moment.


So, two days ago, I had to stare down my own unease with the realization that I am writing a lovely section of my novel-- let's say I am a journalist about to "launch" into a wonderful description of life on board the Titanic, about one day into the trip. Skipping happily along the decks, I am ready to dazzle readers with news of the finery of the first-class cabins, the exorbitant menus at the Captain's table, the excitement of being part of White Star history as I describe this maiden voyage -- all the while knowing that in a matter of hours the Titanic is about to hit that iceberg and sink.


It is hard to write about the hopes and dreams of a main character, lead her on, as it were, or perhaps, allow her to lead me, to a climax I don't wish her to experience. It's a bizarre feeling, it takes courage -- and Evil Twin did not want me to face it down.

Yesterday, I decided I had to get on with it, and so I wrote a lot of garbage. I don't mean garden-variety-twice-a-week-pick-up-garbage, I mean, Jeffrey Dahmer-body-parts garbage. Only, mine was left in a Hefty bag on a porch in the sun for days, kind of garbage, not stored in a freezer.


Evil Twin made me write that crap. And, she left a bag of Viau Whippets chocolate marshmallow biscuits on my desk. My thighs, as they say, are now so big, they've gone condo.


Anyhow, not only did I write garbage and eat garbage and think garbage, I also looked at the garbage in my blog posts -- those shi**y first drafts no one is supposed to see? NaNo stuff? Wow. I have a lot of guts, I think. This really is an interesting November.


I am now over my emotional crisis and raring to tackle this section and deal with whatever fallout arises.


A mafia Don in Montreal was murdered yesterday -- the old Don, the grandfather and founder of his dynasty. Figuratively, he now sleeps with the fishes.
Well, if Evil Twin gets in my way later today, guess what? She's gonna wish she were a better swimmer.

Today was spent  researching music -- a divine prospect and one I really don't wish to hurry, while at the same time, I cannot spend my days endlessly wallowing in the one beautiful swath of this novel.

I am savouring the time I do spend with Anna Garber as she prepares for the most significant night of her young life. Which is to say, I am not going to over paint and write excessively, but, I am not going to gloss it over too much, either.
I am mindful of the pacing.

Which brings me to NaNo -- I may not be a NaNo girl, after all, because my goal has changed from Day One. Now, it seems, I want to write as much as I can, and get this book launched -- but not at the expense of my sanity -- the jury is still out on that one. I don't pretend to have sanity most days, anyhow.


Later today, I will be going out to get a flu shot, doing some marketing in Westmount and then coming home. I may not write much then. But, I am raring to go. Now that my brain is properly stuffed with the Hungarian Rhapsody No. 2 and all its nuances, I am ready to assist the Kapellmeister in teaching Anna how to attack it!

Tomorrow night we turn back the clocks. I like the idea of extra sleep; I hate the idea of dark days when it's only 4 p.m. and you can't see your hand in front of your face. In fact, I find it very hard making the adjustment, and think it's a really dumb idea, because it just feels so much colder when the sun goes down at this time of year.

Years ago, when I lived here -- before I moved away and subsequently returned --
I wrote a poem about November. A rather hopeful one.


So, for those who hate this time of year, here's a small consoling piece of nostalgia:


November! Colder and bleaker
than all the witches tits
in Macbeth, no more.
Sipping wine, munching Ritz bits
I order November and all cold winds
Exeunt from the drab picture
of an unromantic play!
Looking southward, the river
sparkling, the sweet-sooted
chimney tops puff spirals
of long forgotten days
when cities held magic
of shiny black pavements
splattered in oily, rainbowed
dwindling frosts,
and little children scampered home
in shiny Macs and bright umbrellas
through expectant November streets and November grays,
caught up in an eiderdown
of warm tea, and tales of Pooh,
and the onset of Saint Nicholas Days.
November at Haddon Hall, Montreal 1988

EARLY DAY FIVE -- Could This Be Love? 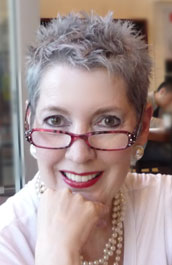